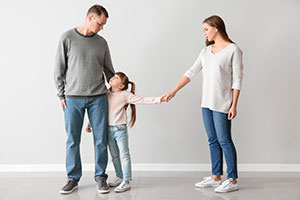 Just because one parent has sole physical custody does not mean that the other parent will not see the child, or spend overnights with the child. Usually, the parent who does not have sole or shared custody will have “visitation” with the child, as explained below.
Call Now To Discuss Your Options (301) 340-1911
If one parent has sole legal custody, that parent will make all decisions for the child(ren), including educational decisions, medical decisions, overall welfare, religion, etc. The other parent has no decision making power at all. Typically, most parents will have joint legal custody and will make decisions together about what is in the best interests of the children.

Are There Different Types Of Visitation Arrangements In Maryland?

Some use the “week on/week off” schedule, where the children spend one entire week with Parent A, the next week with Parent B, and so on. It depends on the case, the age of the children, the distance between where the parents live, and what the parties would like to do. If physical custody is not shared, and the non-custodial parent simply has visitation, the schedule, again, varies based on the needs of the family.

The most typical visitation schedule for a non-custodial parent is that that parent has the child overnight with him or her every other weekend, with one or two weeknight dinners. Other parents have more visitation than that – maybe three weekends every month, and one overnight a week. It depends on the circumstances of the case.

In some cases, the non-custodial parent may be required to have “supervised” visitation with the minor child. If an incident occurred in the past between that parent and the child, or if that parent hasn’t seen the child in a long time, the court may believe that it’s in the best interests of the child that the visitation be supervised by a third party. The supervision may be indefinite, or may be on a “graduated” schedule, e.g., supervision for three months, then switch to regular unsupervised visitation.
Call Now To Discuss Your Options (301) 340-1911

Can The Court Ever Reject A Custody Or Visitation Plan Where Both Parents Are In Agreement?

The court must be sure that the children are safe and protected. An example of this type of agreement would be if one parent agrees that he or she will not seek child support if the other parent simply gives him or her custody. The court will never accept an agreement like that because it is not in the best interests of the child for a parent not to support him or her financially. The court is always going to rule according to Maryland family law.

What Rules Or Restrictions Govern The Relocation Of A Parent With Their Child?

The parents can freely relocate. Every person has a constitutional right to travel, so no parent can prevent or forbid the other from relocating. However, the problems come in when the parent wants to relocate with the minor child(ren). If the parents have entered into an agreement for a particular custody schedule, or the court has ordered the parties to a particular custody schedule, usually, if one parent wants to relocate with the child, that parent has to ask the court permission to do so.

If, when the parties first enter into the agreement, there is already some discussion about relocating, they may choose to include a provision that says they will provide notice to the other parent before relocation (again, with the child). That way, there would be plenty of time for the two of them to discuss it and formulate a new schedule for the child.
Call Now To Discuss Your Options (301) 340-1911
The agreement could also have a provision that states that the child shall not be removed from the school district or the area in which they live unless the court has ordered it, or unless the parties agree otherwise. In that case, the parties can move wherever they want but the child is the constant and doesn’t change until there is an agreement otherwise or until the court orders it.

Is There An Age Where A Child’s Preference Is Taken Into Account In A Custody Case?

The older and more mature the child is the more weight that is given to his or her preference in a custody case. The courts use the “best interest factors” to make custody determinations, which are derived from case law. Age is one of the factors on that list. The older the child is, the more weight the court gives their preference on who they want to live with. Of course, the court needs to understand why the child’s preferences are what they are.

It can’t be because Dad has an x-box, or because Mom takes them shopping. But, if the reasons are sound, then teenagers definitely have a good amount of say in that decision. For younger children, it depends on the circumstances. If younger children are reporting that they’re not being treated well, they’re being neglected or they’re seeing things or hearing things at one of the parent’s homes, or their needs are not being met; certainly, that is something that’s important to the court.

For more information on Different Types Of Child Custody In Maryland, an initial consultation is your next best step. Get the information and legal answers you are seeking by calling (301) 340-1911 today.