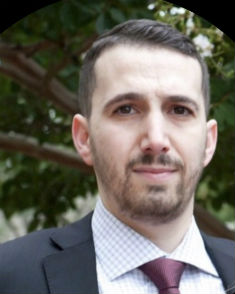 Prior to joining the firm, David practiced law in the Baltimore/D.C. metro area where he handled domestic and criminal matters. He has several years of experience litigating a wide variety of domestic and family law cases, including highly contested divorces (including complex-asset matters), custody, protective orders, and further, became proficient in preparing Separation and Prenuptial Agreements. Since joining the Law Office of Sandra V. Guzman-Salvado, he has continued to focus his attention to handling domestic cases and has demonstrated his commitment to fighting vigorously for his clients. He firmly believes that the foundation of any successful case is a commitment to forging strong attorney-client relationships, built upon trust and frequent communication.

Outside of work, David is fiercely competitive and enjoys playing golf and also soccer, where he serves as captain of FC Baltimore. He is a devoted fan of the Maryland Terrapins and is an avid backcountry skier. He also enjoys spending time outdoors with his dog, Cooper.